Baroda skittle out Tripura for a paltry 58 and win their Group C match by six wickets in the Vijay Hazare Trophy match.

New Delhi: A supreme bowling show by the bowlers, led by Swapnil Singh’s five-wicket haul, helped Baroda skittle out Tripura for a paltry 58 and win their Group C match by six wickets in the Vijay Hazare One-day cricket tournament on Thursday. Electing to bat at the Palam Air Force Ground, the Tripura batting fell like a pack of cards against an inspired Baroda bowling. If left-arm Swapnil led the charge then pace spearhead Irfan Pathan and Yusuf Pathan turned on the heat to make a mockery of the Tripura line-up. Only skipper Manisankar Murasingh (10) could muster a double-figure score as the highest-scorer remained the extras count (16).

Sharing the new ball with Irfan, Swapnil returned with figures of 5-25, while the pace spearhead (2-8) and Yusuf (3-24) shared five wickets between themselves. Chasing the low total, the Ambati Rayudu-led side also face a scare after losing three quick wickets to be reduced for 13 for three, but the skipper ensured that they canter home in 6.1 overs even after they lost another wicket in Deepak Hooda (11). Pace spearhead Chiranjit Paul bagged three, while Swapan bagged one wicket. Rayudu (31 not out) and Hardik Pandya (5 not out) were at the crease when Baroda registered their fourth win in six matches so far. Tripura are winless in their five outings. 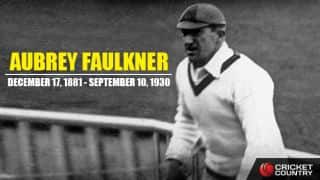