Alur (Karnataka): Leg-spinner Karn Sharma‘s five-wicket haul helped Railways end their campaign with a 106-run win over Haryana in an inconsequential Group B match of the Vijay Hazare Trophy One-Day cricket tournament on Friday. Chasing a modest 220 for win, Haryana were bowled out for 113, inside 36 overs, as Karn finished with figures of five for 13 in 9.1 overs. Only Nitin Saini (20) and Rohit Sharma (26) got past 20 among the Haryana batsmen. Eailier sent in to bat, Railways made 219 for seven in their 50 overs, with Arindam Ghosh anchoring their innings with a 118-ball 76. UPDATES: Vijay Hazare Trophy 2015-16

Ghosh struck five fours and a six, and added 77 with Karn (29) for the fifth wicket. The win hardly had any significance for Railways as they finished fourth in Group B with 12 points, a place above Haryana, who finished their engagements with eight points. Jharkhand and Gujarat are the two teams which qualified for the knock-outs from Group B. 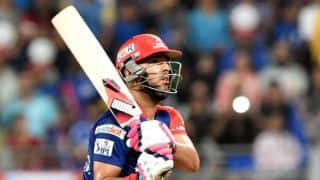