New Delhi: An all-round display by Shrikant Mundhe helped Maharashtra register a 40-run victory over Odisha in their Group C match of the Vijay Hazare Trophy. Mundhe hit a 55-ball 50 as Maharashtra scored 217 for eight and then chipped in with figures of four for 35 to bundle out Odisha for 177 in 43.4 overs. Mundhe was ably supported by SM Kazi (4/29). Put in to bat, Maharashtra did not have an ideal start as they lost their top four batsmen for 57 runs, but contributions from lower order — Ankit Bawne (40), skipper Kedar Jadhav (39) and Mundhe — enabled the team to get past 200-run mark. ALSO READ: Vijay Hazare Trophy 2015-16: How MS Dhoni, Amit Mishra, Stuart Binny, others fared in the 1st Round

For Odisha, Basant Mohanty was the pick of the wickets as he claimed three for 40. Chasing a modest target, Odisha batsmen flattered and except for Govinda Poddar, who top scored with 82-ball 74, none of the other could contribute substantially, even as Mundhe and Kazi wreaked havoc. Eariler on Day 1 of the Vijay Hazare Trophy 2015-16, Pacer Alok Sahoo grabbed five wickets for 39 runs as Odisha recorded a narrow three-run victory over Vidarbha in  match on Thursday. ALSO READ: MS Dhoni top-scores but fails to prevent Jharkhand from losing to Gujarat in Vijay Hazare trophy 2015-16

Electing to bat, Odisha put up 226 for nine with number seven batsman Arabind Singh top-scoring with a 64-ball 62 while Biplab Samantaray contributing 37. Sahoo also contributed a useful 35 off 38 balls. Chasing a modest target of 227, Vidarbha were all out for 223 in 47.2 overs. Ravi Jangid’s 97 went in vain as Vidarbha fell an agonising three runs short in the Group C match. 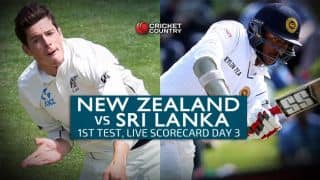