A clinical performance from Chhattisgarh brushed aside Saurashtra by nine wickets. In the absence of Cheteshwar Pujara, Saurashtra produced one of their most woeful performances with the bat that saw them getting bowled out for a lowly 110 at the Palam Airforce Ground in New Delhi. Left-arm spinner Sumit Ruikar picked up his sixth domestic List-A five-wicket-haul. Ruikar picked up 6/26 from nine overs after which an unbeaten half-century from Rishabh Tiwari saw Chhattisgarh home.

Robin Uthappa and Sheldon Jackson put 27 for the first wicket but their dismissal in a span of eight deliveries on the same score triggered a slide. Arpit Vasavada scored 34 with five boundaries which was the only notable contribution. Jaydev Unadkat and Chirag Jani were the other two batsmen who registered double-digit score before Saurashtra were rolled over inside 35 overs. Chhattisgarh lost Ashutosh Singh in the second over, but Tiwari and Manoj Singh added unbeaten 109 runs with the opener hitting six fours and a six.

At the Feroz Shah Kotla, Kolla Sumanth led Hyderabad to a one-wicket win over Odisha as Hyderabad chased down Odisha s 247 for 8 with four balls remaining.

Opting to bat first, Odisha were buoyed by skipper Govind Poddar s 108-ball 93, which was ably supported by the middle-order of Subhranshu Senapati (41), Biplab Samantray (31) and Abhishek Raut (34). But, after being 190 for 3, Odisha lost their next five wickets for just 32 runs to finish at 248/7. Seamer Chama Milind claimed 6 for 43.

In reply, Hyderabad had a good start with openers Tanmay Agarwal (76) and Akshath Reddy (63) putting on 119 runs for the opening wicket. One down batsman, K Rohit Rayudu made 18 but Odisha comeback well claiming four wickets for just five runs.

Np.6 batsman Sumanth, though, anchored the chase with the tail and remained unbeaten on 43 to lead his team to a tense win one-wicket win.

The third game of the group, at Palam B Stadium, also went down to the wire with Andhra claiming a one-wicket win over Uttar Pradesh. Opener Samarth Singh s unbeaten 115 and Akshdeep Nath s 119 not out had taken UP to 330 for 4. Skipper Suresh Raina added valuable 52 after UP were in trouble at 45 for 3.

However, a combined batting effort from Andhra, led by experienced campaigner Ravi Teja (79*) and handy contributions from opener Ashwin Hebbar (53) and B Sumanth (43) helped their team to get close to UP s total.

Despite this, UP had Andhra at 249 for 7 but a valiant 24-ball 43 from India international Karn Sharma proved to be the difference in the end. Karn was run out with Andhra still 26 runs adrift of the target, but the tail kept their nerves to clinch victory with three balls remaining. 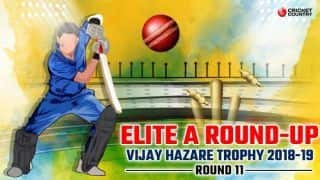 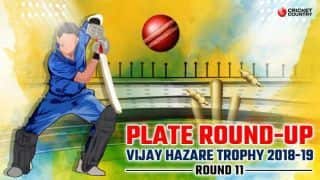