A round-up of the Elite Group C matches on day one of the 2018-19 Vijay Hazare Trophy.

A round-up of the Elite Group C matches on day one of the 2018-19 Vijay Hazare Trophy.

At Chennai s MA Chidambaram Stadium, Services began their campaign by beating Tripura by seven wickets via the VJD Method in a rain-hit opener. Three wickets to Diwesh Pathan and eight between the other four bowlers used saw Tripura bowled out for 118 in 38.4 overs, with BB Ghosh s 21 the best score.

RK Singh s 48 off 58 balls forged the chase after the loss of Nakul Verma for 0, and skipper Rajat Paliwal (21*) and Saumya Swain (19*) ensured there were no further jolts until rain curtailed the match at 104/3 in the 26th over to give Services four points.

Elsewhere in Chennai, wet conditions washed out matches between Jharkhand and Haryana and Gujarat versus Bengal, thus giving each team two points. 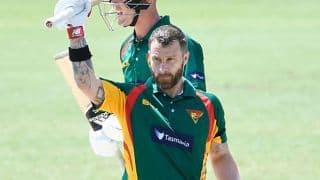