The incident occurred when Delhi were batting.

Nitish Rana s 98-ball 107 might have helped Delhi thrash Madhya Pradesh by 75 runs during a Group B match of the 2018-19 Vijay Hazare Trophy on Thursday, but it was India wicketkeeper-batsman Naman Ojha s shameful behaviour that marred the encounter at the Palam ground in New Delhi.

Batting first, Delhi were helped to 284 for 8, courtesy Rana s 107, that was laced with 10 hits to the fence and three sixes. In reply, MP were bundled out for 209 in 42.4 overs with part-time off-spinner Lalit Yadav picking five wickets for 25 runs.

According to a report in PTI on Thursday, the incident occurred when Delhi were batting. Left-handed batsman Rana was on strike in the 28th over when he played a sweep shot off left-arm spinner Rameez Khan. The fielder at square leg took a catch that led to wild celebrations among the MP players. Rana, however, was not convinced about the catch at remained at the crease.

Umpire Rajeev Godara walked up to square leg umpire Navdeep Singh and the matter was referred to the third umpire (match referee in this case).

Rana was ruled not out by match Nitin Goel. Ojha, who played a Test, ODI and a couple of T20s, was livid at the decision and showed the finger to Godara in angry. Ojha also questioned his credentials rudely as play was brought to a halt for 20 minutes.

Match referee Goel had to step on the field to calm the situation. It is learn that Ojha may face disciplinary action for his behaviour on Thursday. 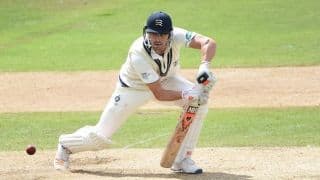