A round-up of the Plate Group matches on day two of the 2018-19 Vijay Hazare Trophy.

A round-up of the Plate Group matches on day two of the 2018-19 Vijay Hazare Trophy.

On List A debut, Meghalaya tasted success with an eight-wicket win over Mizoram at Nadiad on the outskirts of Ahmedabad. Skipper JJ Lamare hit the winning runs, finishing on 41 off 55 balls in the company of former Delhi wicketkeeper Puneet Bisht who scored 95 off 90 balls, with 14 fours. The pair featured in a stand of 116 for the third wicket.

For Mizoram, former Punjab batsman Taruwar Kohli followed a century a day before with 90 off 123 balls, just the second batsman to get to double figures. Mizoram s innings of 154 in 43.4 overs contained three zeroes and five single-digits scores. Kohli and skipper Ruata (34) were the main scorers up against a good bowling effort from Meghalaya, with Abhay Negi, Amiangshu Sen and RR Biswa taking two wickets each.

Kohli also took a wicket and a catch.

At the Motibaug Ground in Vadodara, Manipur won their first competitive cricket match by bowling out debutants Sikkim for 84 and then chasing in 19.2 overs without a wicket lost.

Sikkim chose to bat and lasted 37.2 overs, with five ducks and Lee Yong Lepcha s 29 off 61 balls the best contribution; only two more batsmen got past single figures. The innings gave away once the fourth wicket fell at 48 in the 18th over, with the next six falling in less than 19 overs. Bishworjit led the way for Manipur with excellent figures of 7-2-9-3, well backed by each of his fellow bowlers.

At the Shastri Maidan in Anand, debutants Uttarakhand – led by Delhi veteran Rajat Bhatia – slumped to defeat against Bihar who won their second in a row to top the group with eight points. Bihar skipper Pragyan Ojha s decision to field was vindicated by his attack, which combined to bowl out Uttarakhand for 160. Former Jharkhand spinner Samar Quadri took three wickets for the second game in a row, and with Anunay Singh also getting three the opposition were at odds to form partnerships. Barring Vineet Saxena s 57 and D Dhapola s 38 off 46 balls not batsman made an impact.

Chasing 161, Bihar were carried by wicketkeeper-batsman Vikash Ranjan s 102-ball 79 and 33 off 40 balls from Keshav Kumar. 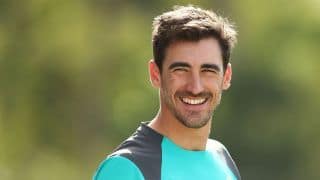