On Saturday, the games involving Delhi, Himachal Pradesh, Baroda and Vidarbha too were abandoned due to the weather conditions.

Rain made its presence felt across Dehradun and Vadodara as all the Group B and plate matches of the Vijay Hazare Trophy 2019-20 were washed out on Sunday.

The overnight rain in Vadodara marred the three matches of Group B. The Maharashtra vs Himachal Pradesh clash from Round 1 at the Reliance Stadium, Vadodara, the Uttar Pradesh-Haryana round five clash at the MRS Railway Stadium and the Baroda versus Punjab match at the Moti Bagh Stadium were washed out without a ball being bowled.

On Saturday, the games involving Delhi, Himachal Pradesh, Baroda and Vidarbha too were abandoned due to the weather conditions.

The rain also marred both the matches in plate group. The Manipur versus Chandigarh clash at the Tanush Academy Ground in Dehradun was abandoned without a ball being bowled while the Nagaland-Mizoram match at the Abhimanyu Cricket Academy in Dehradun suffered the same fate.

Kerala, Goa and Chhattisgarh on Sunday registered victories in the Round 5, Elite Group A matches of the Vijay Hazare Trophy 2019-20.

Chhattisgarh, who had beaten Mumbai on Saturday, defeated Andhra by 56 runs at the KSCA Cricket (2) Ground in Alur and moved to the top spot in the points table of Group A, having won twice in their four matches and adding four points to their tally from the two washed out games.

While Goa registered a 42-run win over Jharkhand at the Just Cricket Academy Ground in Bengaluru. Kerala, meanwhile, beat Hyderabad by 62 runs at the KSCA Cricket Ground in Alur. 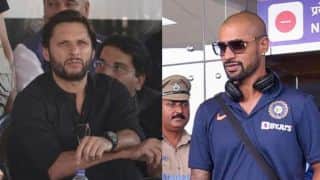