A round-up of Elite Group B matches in round seven of the 2018-19 Vijay Hazare Trophy.

A round-up of Elite Group B matches in round seven of the 2018-19 Vijay Hazare Trophy.

At Delhi’s Ferozshah Kotla ground, Andhra clinched a last-ball thriller against Chhattisgarh by two wickets. Led by Ashutosh Singh s 110 and a 62-run knock from Manoj Singh down the order, Chhattisgarh had posted 248/8. Andhra, in response, lost wickets but had the required in control throughout.

Ashwin Hebbar (53) and Srikar Bharat (30) added 70 for the first wicket. The big guns Hanuma Vihari and Ricky Bhui both failed, and at one point, Andhra needed 88 in 56 balls with only four wickets in hand. Ravi Teja (53) and Karn Sharma (55 off 29) chipped in with vital contributions down the order and added 74 in 49 balls to turn the tide, though it was left to Siva Kumar to finish the match. This was Andhra s third win in four matches which means they currently lead the standings, whereas Chhattisgarh remain at fifth.

Odisha produced a fine performance with both bat and bowl that was enough for them to edge Delhi at the Palam Airforce ground in the capital. Odisha posted 249/4, led by half-centuries from Govinda Poddar, Biplab Samantaray and Subhransu Senapati, in response to which Delhi fell short by nine runs despite skipper Gautam Gambhir and Rishabh Pant getting starts.

Having piled the runs, Odisha s bowlers backed their batsmen well. Except Abhishek Raut, all the remaining seven bowlers got among the wickets. Unmukt Chand and Dhruv Shorey departed in quick succession to leave Delhi two down at 24. Gambhir and Nitish Rana then added 48 for the fourth wicket before Anurag Sarangi sent back the Delhi skipper. Pant, with thee fours and three sixes, tried to get Delhi back in the game, but Biplab Samantaray dashed those hopes. Lalit Yadav, Subodh Bhati and Navdeep Saini tried but it turned out a dauting task in the end.

Left-arm pacer Jaydev Unadkat produced a fine spell of fast bowling, aided by an equally effective piece of bowling from Dharmendrasinh Jadeja, which was the anchor behind Saurashtra strolling to a seven-wicket win over Madhya Pradesh. Unadkat produced stellar figures of 4/23 from nine overs, while Jadeja picked up 3/33 to restrict Madhya Pradesh to 136. In reply, Saurashtra chased down the target with 25 balls remaining.

Jadeja picked up three of MP s top five batsmen, before Unadkat returned to wipe out the tail. Barring Saransh Jain, Anshul Tripathi and Rameez Khan, no batsman even entered the 20s. Saurashtra were never going to be troubled, and it was evident from the manner in which Robin Uthappa and Sheldon Jackson and started. The two put on 52 in just over 10 overs, setting the platform for a chase. Kartikeya Singh and Mihir Hirwani sent back both batsmen, before Jain took out Jaydev Shah for 1. But Cheteshwar Pujara and Arpit Vasavada batted patiently to get Saurashtra home to place them second on the points table. 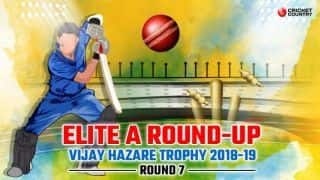 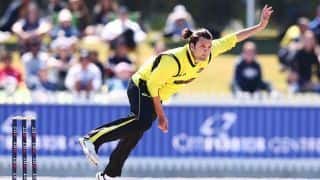