Mallya s financial troubles impacted the Tridents, which he took ownership of in 2016, with players yet to be paid their full amounts for the 2018 season that concluded in September.

Former Indian Premier League franchise Royal Challengers Bangalore owner Vijay Mallya s assets are dwindling by the minute. The Indian business tycoon, currently fighting to avoid extradition from the United Kingdom to India where he has committed bank fraud, is all set to lose ownership of Caribbean Premier League (CPL) franchise Barbados Tridents ahead of the 2019 season.

According to a report in the Guyana Chronicle on Wednesday, Mallya s financial troubles impacted the Tridents, which he took ownership of in 2016, with players yet to be paid their full amounts for the 2018 season that concluded in September.

CEO of the CPL, Damien O’Donohoe, conformed that talks are on with number of prospective buyers and that the new owners would be announced ahead of the player draft on May 22 in London.

“That’s obviously been a big headache for us (but) that issue in relation to Barbados will be getting resolved in the next two to three weeks,” O’Donohoe was quoted as saying in the report. (ALSO READ: 2019 CPL draft on May 22 in London)

“We will also have a change of ownership which we hope to announce in two weeks’ time and that’s a very experienced owner who is going to come in, and it’s something that we’re obviously excited about and we’re looking forward to a fresh start at the end of this month.”

CPL s chief operating officer, Pete Russell, expressed gratitude to all the affected players for their professionalism. “We just want to put on record how grateful we are to the patience of the players. They’ve been very understanding,” he said.

“For us it’s just the worst possible scenario where you’ve got to assess circumstances where an owner for whatever reason can’t pay players is just not acceptable really. It’s been a process we’ve had to go through and we’re at the end of the process and it’s all positive going forward.” (ALSO READ: India’s tour of West Indies pushed back by two weeks)

The 2019 edition of the CPL has been rescheduled. It will now run from September 4 to October 12 so that it doesn t class with India’s tour of West Indies. 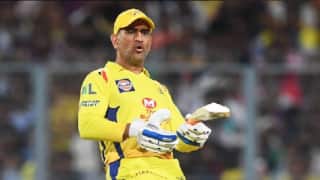