Chennai: All-rounder Vijay Shankar will lead Tamil Nadu in the Syed Mushtaq Ali T20 cricket tournament to be held at Vishakhapatnam and Vizianagaram from January 8 to 14. The state selection committee picked the team after two practice games among the probables. Vijay, who was picked in the India Test team during the recent series against Sri Lanka, had led the state to victory in Vijay Hazare Trophy and Deodhar Trophy last season. Baba Aparajith has been appointed his deputy, said a release from the Tamil Nadu Cricket Association (TNCA).

The squad includes Dinesh Karthik, who was part of the national ODI team in the recent series against Sri Lanka and young all-rounder M S Washington Sundar. He made his ODI and T20 International debut in the matches against Lanka. Tamil Nadu plays its first match against Andhra Pradesh at Vishakhapatnam. 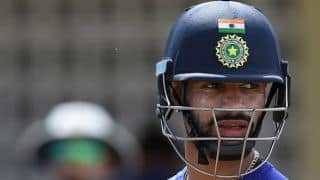