Skipper Vijay Zol continued to make merry against the Sri Lankan attack as he scored his second successive hundred of the series to extend India Under-19's lead to 181 runs in the second and final 'Youth Test' on Tuesday. 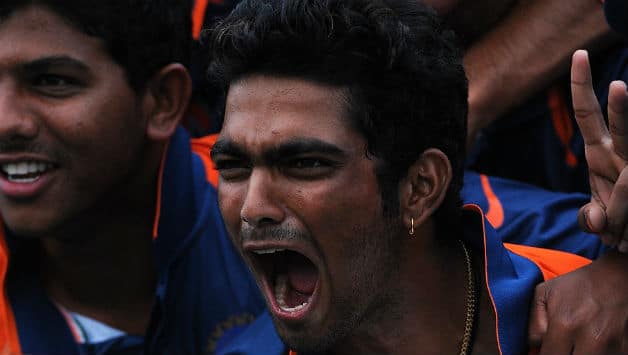 Skipper Vijay Zol continued to make merry against the Sri Lankan attack as he scored his second successive hundred of the series to extend India Under-19‘s lead to 181 runs in the second and final ‘Youth Test’ on Tuesday.

Resuming the second day on 70 for two, India declared their first innings at 393 for eight riding on Zol’s 128. Sizeable contributions came from Sanju Samson (70) and Shreyas Iyer (84) — the two had made half-centuries in the first Test as well.

At stumps, Sri Lanka were 11 for no loss in their second essay, still 170 runs behind the visiting side.

Overnight batsmen Zol and Samson started confidently. Zol’s strokeful knock came off 204 deliveries and was laced with 16 boundaries and a six. Zol had scored 173 in the last match that ended in a draw.

The skipper was ably supported by Samson and the duo stitched together a 160-run stand for the third wicket to take India past the Lankan first innings score of 212.

Before getting out to spinner Lakshan Jayasinghe, Samson stroked 10 boundaries in his 122-ball knock.

The right-handed Iyer, who came in at the fall of Samson’s wicket, too looked at ease as he joined hands with Zol to build a healthy lead.

The pair shared a 60-run stand before Zol was dismissed by left-arm pacer Binura Fernando at 279. Coming in at number six, wicketkeeper Ankush Bains could only manage seven runs before spinner A K Tyronne had him caught.

Offie Aamir Gani then made a quick 41 that included four boundaries and a six, in the process sharing a 98-run partnership with Iyer for the seventh wicket.

Hashan Dumindu (6) and Minod Bhanuka (5) were at the crease when the stumps were drawn.