A few weeks ago, Sachin Tendulkar made his singing debut with Sonu Nigam. In a song named ‘Cricket waali beat‘, Tendulkar was seen rapping names of the cricketers he played with. The song, however, was made to promote his new app titled 100 MB. While the catchy song is still doing rounds on social media, his childhood friend and former teammate Vinod Kambli has released a teaser of his song named ‘Asa Mee…Mee Asa‘. In the video he is seen roaming around the streets, railway stations, and sea faces of Mumbai. All the same, this is not the first time Kambli has been associated with music. He had sung a song in Sanjay Manjrekar’s maiden album Rest Day.

Talking to radiomirchi.com, Kambli revealed the place shot in the video are related to Kambli’s childhood where he was born, where he travelled, where he played cricket. Nonetheless, Kambli did not reveal the release date, saying he wants to take the fans by surprise.

When asked about his favourite cricketing moment, Kambli said he enjoyed smashing 224 runs against England in 1993, at his home ground Wankhede Stadium. India won the match by an innings and 15 runs, eventually lifting the series 3-0. Kambli also mentioned about his 664-run stand with Tendulkar during school days. 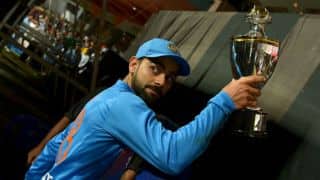