Interestingly, Khanna also took part in many film stars cricket matches back in his days, as a batsman. He had a keen understanding of the game and would often share his opinion on the same.

Bollywood actor Vinod Khanna, who passed away on Thursday after a battle with cancer, was an avid cricket follower. In fact, his first love was cricket, and not films. This interesting revelation came to the fore a day after the legendary actor passed away in Mumbai. Khanna, who left his film career to become a devotee of Osho when he was at peak, later returned to the industry for a second innings. After doing a few films, he took to politics and was a four-time BJP MP. As a matter of fact, Khanna was a sitting MP from Punjab s Gurdaspur seat.

A report in the mid-day revealed that it was cricket, and not films, that Khanna loved more. “My first love is cricket, not films!”, the report quotes Khanna as saying during the interview given to The Illustrated Weekly of India World Cup Special (June 10, 1979). Khanna, reportedly, believed that playing cricket was more difficult than any role he had ever played, if only because there were no retakes in cricket.

Interestingly, Khanna also took part in many film stars cricket matches back in his days, as a batsman. He had a keen understanding of the game and would often share his opinion on the same. “You know how Sunil Gavaskar began rivalling Geoffrey Boycott as an opener? Sunny so came on because he knew which Bob Willis ball to leave alone. If you know which ball to leave alone, the ball to hit automatically comes along, the report quotes him from a conversation during one of those matches.

Gavaskar was Khanna s favourite cricketer. He once said, “Viswanath may be in a class by himself, but my favourite is Gavaskar. How meticulously careful Sunny is to get in line with the ball. That left foot’s always in place. And how, to this day, he uses his feet. I’ve seen batsmen forgetting the use of their feet as they get on in years. But Gavaskar’s an exception.”

Khanna was also of the opinion that Gavaskar should have joined the rebel Kerry Packer World Series. “Gavaskar said he wanted to go to Packer so that he may face the best bowling and get to know how good he really is. There’s a creative talent talking. It’s only the creative talent that will invite such a challenge, the lesser talent will shy away. But we read the wrong meaning into it and pontificated that Sunil was after the Packer money. In denying Sunil that first opportunity to go to Packer, we denied talent.”

We should therefore have welcomed the opportunity to see how good Gavaskar and Viswanath were when pitted against the world’s best. Instead we put obstacles in their way,” Khanna had said. 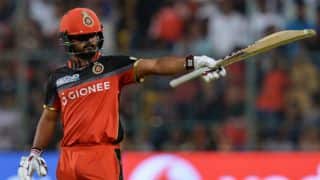 IPL 2017: "We are still confident that we can make the playoffs," says Aaron Finch