Virat Kohli also completed 5,000 runs in the longest format on Day One of the final Test against Sri Lanka at Feroz Shah Kotla.

In India, Sunil Gavaskar’s name was synonymous to cricket in 1970s-80s. Sachin Tendulkar replaced him during his illustrious 24 years on the field. In modern era, Virat Kohli has become the new sensation of Indian cricket. The current Indian skipper is always on the front page due to the plethora of records he breaks for fun. Kohli became the first captain to slam hat-trick of centuries in a three-match (ongoing) series, against Sri Lanka, during his heroics at Feroz Shah Kotla on Saturday. While many skippers have struck 3 or 4 centuries in a 4-or 5-match Test series, this is the first such instance in a series comprising of 3 Tests.

– Kohli now has 11 international hundreds in a season, only behind Tendulkar (12).

– This is Kohli’s maiden century at Feroz Shah Kotla.

– This is also Kohli’s fastest hundred coming off 52 balls. 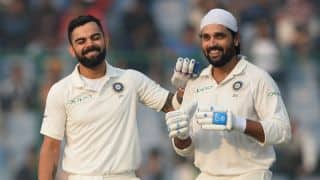 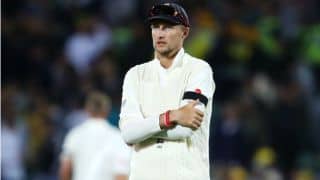