Kohli became the second Indian captain, after Sunil Gavaskar, to score a double-century and a fifty in two different innings of a Test.

As India played Sri Lanka in the final Test of the three-match series, Virat Kohli became the second Indian captain, after Sunil Gavaskar, to score a double-century and a fifty in two innings of a Test. Kohli scored 243 in the first innings at Feroz Shah Kotla before India declared their innings for 536 for 7. Later, he scored 50 and got out before India declared their second innings for 246 for 5, setting a 410-run target for Sri Lanka.

Gavaskar had achieved the feat against West Indies in in 1978, scoring 205 and 73 in the two innings of the Mumbai Test. Kohli thus becomes the seventh captain to have done this, after Mark Taylor, Graham Gooch, Graeme Smith, Stephen Flemming, Ricky Ponting and Gavaskar.

Kohli now holds the record of the most double-hundreds (6) by a captain, surpassing Brian Lara (5). He is now at par with Sachin Tendulkar and Virender Sehwag, having scored most career double-hundreds as an Indian cricketer. 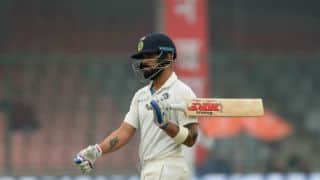