A young Indian side led by the fiery Virat Kohli finally broke the South African jinx at Durban. This 6-wicket win is India s first at Durban against South Africa in 7 attempts. It was Kohi in alliance with Ajinkya Rahane that took India 1-0 up. The duo added 189 runs for third wicket to smother South Africa s hopes. India also broke’s South Africa’s 17-match unbeaten run at home.

Set to chase 270, Rohit Sharma and Shikhar Dhawan were out in the middle with a clear intent to make amends for their poor Test performance. Both played out a fast spell early on. Rohit against new-ball seemed a different player altogether, smacking 2 fours and a six in his 30-ball stay.

In a bid to hit Morne Morkel out the park, Rohit perished mis-hitting, handing a catch to Quinton de Kock. He fell to Morkel for the fifth time in his career. Virat Kohli came out in middle to face a fired up Kagiso Rabada. Kohli along with Dhawan refused to be held back and played out scorings shots at will. Dhawan, in particular, did not let Chris Morris and Imran Tahir settle.

Just as things were looking rosy for India, Kohli and Dhawan had miscommunication costing the latter his wicket. Dhawan departed for a 29-ball 35.

Ajinkya Rahane came out at No.4 as hinted by team management. With the clouds hovering on, both the batters weathered a storm in the middle and kept India ahead of the DLS par score. JP Duminy was called in as relief bowler for Morris. The pair added 50 runs in 60 balls putting back on South Africa.

Out of options, du Plessis called on Aiden Markram to bowl with India cruising towards their target.

Rahane recorded his fifth consecutive ODI fifty in 60-balls, his 24th overall. With this Rahane is now level with Sachin Tendulkar and Kohli (twice) with most consecutive fifties for India. The duo soon brought up their 150-run stand.

Kohli struck his 33rd ODI hundred in 105 deliveries, his 18th in chases. This was also his first in South Africa.

Rahane perished with India just 14 runs away from a win. He fell for 79 to Andile Phelukwayo. Kohli was dropped by Zondo on 108. His stay, however, was short-lived. He fell for 112 off Phelukwayo, this time Kagiso Rabada making no mistake.

MS Dhoni and Hardik Pandya completed the formalities getting India to a 6-wicket victory, thus ensuring the visitors’ head to Centurion with a 1-0 lead.

This was also the fourth time in ODIs that both captains has scored a hundred in the same match. Kohli features three times. 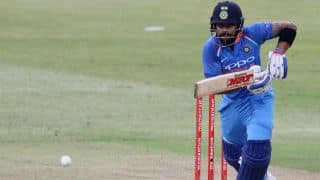 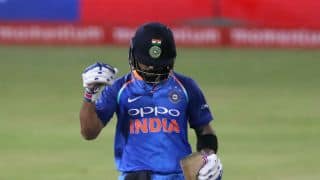