India are up against Australia's first innings' 530.

Virat Kohli and Ajinkya Rahane took India into lunch at 224 for three on Day Three of the third Test against Australia in Melbourne. India are up against Australia’s first innings 530 and have batted well so far on a good surface at the Melbourne Cricket Ground. Kohli has moved past his fifty and has looked good in the middle.

The day began on a disastrous note for India. Cheteshwar Pujara poked at the second ball of the day; Brad Haddin threw himself to his right and took an excellent catch mid-air. Out came Virat Kohli and he played some delightful strokes. He was driving well and played some crunchy shots to get going. Even as he was on his way, Vijay played in his typical circumspect way.

Mitchell Johnson breathed a bit of fire as he had Vijay almost gloving one to the slips. The next ball hit Vijay on the helmet as he tried to take his eye off the ball. This time however, Johnson only stared and walked back. Nathan Lyon was perhaps the only one who came towards Vijay and enquired about him. Interestingly, Vijay was batting on 63. He added only 13 runs to his overnight score and was caught at first slip off the bowling of Shane Watson.

Rahane walked out and got off and running easily. He was lucky early on when he edged Lyon through the wicketkeeper and first slip. However, he was speeding at a T20 rate, knocking the ball around the ground. The fast outfield and the timings helped the Indians capitalize. Kohli got to his fifty as lunch approached and Rahane had moved into the 40s.

Though India lost two wickets in this session, they managed to score over 100 runs and that would make it their session. Both Kohli and Rahane have looked at ease while playing their shots. They would keep in mind what Ravichandran Ashwin said at the press conference at the end of Day Two, that India would target 650. 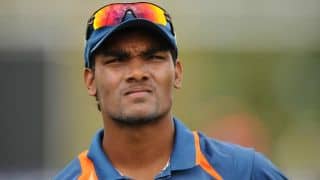 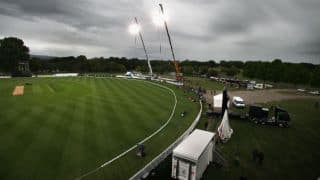