Virat Kohli and Ajinkya Rahane have taken the challenge to Australia on Day Three.

On Day Three of the third Test between India and Australia in Melbourne, Virat Kohli and Ajinkya Rahane sparkled as India tried to get back into the game. Kohli and Rahane scored centuries as India are going after the 530-run challenge set by Australia earlier in the game. India are 336 for three at tea on Day Three.

Rahane and Kohli have batted with authority since they have come together. India had lost Cheteshwar Pujara and Murali Vijay early in the day. When Rahane and Kohli got together, India were 147 for three and in a slightly precarious position. Both then went on to play very fluent innings to help India roar back.

Kohli has now scored his third ton in this series, while Rahane gets his first in Australia. The great thing is that Rahane now has tons on each tour in 2014. Kohli had a bit of luck as Shane Watson dropped a chance in the slips. He was also involved in a slight tiff with Mitchell Johnson.

India would go into tea in a good spot and they would want to build on that score in the evening. 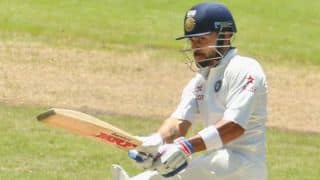