Royal Challengers Bangalore (RCB) captain Virat Kohli said that all the doubts about Yuvraj Singh‘s future should be put to rest. Yuvraj scored a magnificent 68 not out off only 29 deliveries to help Bangalore beat Delhi Daredevils in the Indian Premier League (IPL) 2014 on May 13 in Bangalore.

“It’s been very pleasing to see Yuvi bat like that. Many people have written him off recently but all those who doubted him should put those doubts to rest,” Kohli said.

“In life and cricket he has always come back stronger and for that I respect him a lot. He is a world class player and will remain so till he plays the game,” he said.

Talking about Tuesday’s 16-run win, Kohli said, “Feels amazing, really wanted that win. In the field, we made a few lapses but overall a good performance,” Kohli said.

“It’s important not to panic and this time I told Yuzvendra Chahal to back himself and I backed my bowlers too. We have to take it one game at a time and the results will follow.”

Yuvraj, who was adjudged Man of the Match said the belief in him by his team management and senior players helped him a lot in building self confidence.

“It was important we finished well. I started really well and just kept believing in myself and seniors like Daniel Vettori and Muttiah Muralitharan believed in me. I wanted to come to a place where I can be myself and play my game and thanks to Vijay Mallya for bringing me over here,” he said. 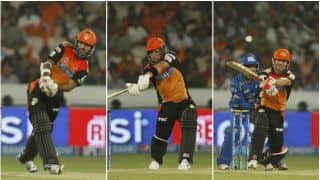 IPL 2014: Sunrisers Hyderabad need to shore up their batting to qualify for play-offs