India had reached 127 for the loss of three wickets in 27 overs.

Virat Kohli and Suresh Raina reached 51 runs partnership from 55 balls in the second ODI played against West Indies at Feroz Shah Kotla on Saturday. Kohli had reached 33 from 44 balls while his partner Raina had gathered 32 runs off just 27 balls.

Earlier, Shikhar Dhawan came out to open the batting for India but Dhawan was knocked out Jerome Taylor only in the second over of the match. Rahane departed in the 13th over after scoring 12 runs.

Ambati Rayudu was dismissed by Sulieman Benn when he was batting at 32. India had reached 127 for the loss of three wickets in 27 overs. 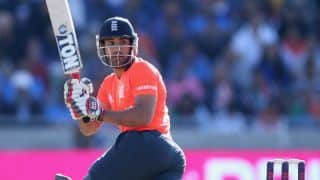