Virat Kohli, along with his beau and Bollywood diva Anushka Sharma, planted a tree in Dambulla ahead of India's first One-Day International (ODI) against Sri Lanka.

With his charismatic batting and stylish life off the field, India captain Virat Kohli has become a youth icon of the nation. Being a role-model comes with its own responsibilities to inspire the followers with good deeds and Kohli knows well how to do that. While the Delhi-dasher has been often seen promoting charitable activities of standing up against social cause, he did his bit towards making the world greener as he, along with his partner and Bollywood diva Anushka Sharma, planted a tree in Dambulla ahead of the first One-Day International (ODI) against Sri Lanka. However this is not the first time his fans would see him plant a tree. READ: Kohli wants specific roles for players keeping World Cup 2019

Royal Challengers Bangalore (RCB), the franchise he has represented forever in Indian Premier League (IPL), every season holds a special match where the team members wear special green jerseys to inspire more people to take initiatives to keep environment healthy. Being the skipper of the team, he also plants a tree before the special match every year. Here is one picture of Kohli and Anushka from the Dambulla event.

India, who have defeated the hosts 3-0 in the Test series, certainly have the edge for the limited-overs leg of the tour as well. India will play five ODIs and a Twenty20 International on the tour. 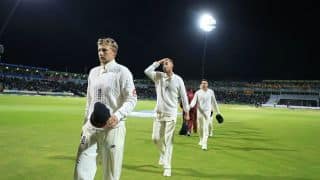