Virat Kohli and partner Anushka Sharma were greeted by a sea of journalists at the Mumbai International Airport.

Kohli and Anushka walked hand in hand amid a sea of media at the Mumbai International Airport. The batsman made just one run in the lost semifinal against Australia and Anushka, who was in the stands during the game, was blamed for his poor show by some fans in social media platforms such as Twitter. READ: ICC Cricket World Cup 2015: Virat Kohli could’ve done more to help India retain crown

Elsewhere, Dhoni landed in Delhi, while five other players besides Team Director Ravi Shastri, touched down at the Mumbai International Airport. READ: Does the Indian cricket team deserve a better class of fans?

“By tonight all others, who have remained behind, would be back in India,” they informed. ICC Cricket World Cup 2015: Complete Coverage 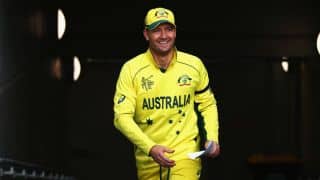