Virat Kohli had recently sought for leave from the Indian board ahead of the South Africa tour.

Virat Kohli had recently sought for leave from the Indian board ahead of the South Africa tour in January. As for now, Kohli will not be part of the three-ODI and three-T20I series against Sri Lanka. As soon as Kohli s absence from the limited-overs series surfaced, social media was set ablaze on Kohli and Anushka Sharma tying the knot in December. Reports suggested Virushka be having a destination wedding. The venue is supposedly Italy.

As soon as the wedding news made rounds, Anushka s spokesperson told Bollywoodlife: No, Anushka and Virat are not considering marriage at this point in time. They might get married next year or the year after that but as of now, there s nothing happening. In fact, contrary to another report that s doing the rounds that Anushka has already taken off to Italy for her intimate wedding, she is very much in town, busy with her brand meetings at Mumbai s BKC. So don t fall for any wedding news.

Contrary to the spokesperson s comments, Anushka left with her parents to Italy on Thursday night, as reported by Bollywoodlife and India.com Buzz. Deepika Padukone, too, has left with her parents for Italy, though that may not be related to the topic. Kohli s childhood coach Rajkumar Sharma s leave application added further fuel to the fire. On Friday morning, the coach was seen headed to Milan. Coincidence much?

The dates fixed in the Bandra court for marriage are December 12, 18, 21 and January 5. The January date seem hard to believe with the South Africa tour going underway since then.

Unlike the previous wedding rumours that have been denied by Kohli and Anushka on several occasions, none of them has come forward this time to quash all the reports. All this does build to the excitement for all Virushka fans. So, finally, is wedding on cards for the much-hyped couple?

As they say, When in Rome, do as the romantics do… 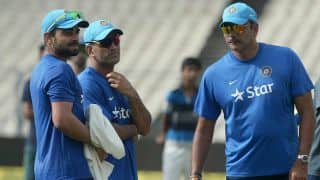