Virat Kohli also has an average of 48.80, best among all in the list.

India dominated England in the first T20I at Old Trafford, Manchester by winning the match by 8 wickets. The match was highlighted by Kuldeep Yadav’s maiden 5-wicket haul and KL Rahul‘s second T20I century. Amidst all this, Virat Kohli registered a record to his name. He became the first Indian male batsman to complete 2,000 T20I runs (Mithali Raj was the first overall).

Kohli, who has came to bat at three different positions in his last three matches, finished the match in style smashing a six over long-on off Moeen Ali. He came at No. 4 after the wicket of Rohit Sharma, and remained unbeaten on 20 off 22 balls at the end of the match. India won the match with 10 balls to spare and took a lead of 1-0 in the 3-match T20I series against England. 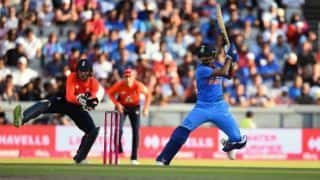