Virat Kohli becomes 2nd Indian after Sunil Gavaskar to score 3 tons in a series in Australia.

Right-handed batsman Virat Kohli on Sunday created history when he became the second Indian cricketer after Sunil Gavaskar to score three centuries in a Test series in Australia. Kohli achieved the feat during the third day’s play at the Melbourne Cricket Ground (MCG), as he led Team India’s revival alongwith Ajinkya Rahane.

Kohli brought up his third century of the series with a four on the leg side, reaching the three-figure mark after 168 balls and hitting 11 fours. Kohli and Rahane added 189 runs for the fourth wicket as India reached 336 for three at tea, trailing by 194 runs in the first innings. Rahane was unbeaten on 111 off 142 balls, hitting as many as 15 fours as India produced a strong performance so far in the first two session of the third day.

This century is Kohli’s fourth in Australia, and three in this series. The 26-year-old, who captained India in the first Test in absence of MS Dh0ni, struck two centuries in the first Test at the Adelaide Oval, but could not prevent a defeat by 48 runs for India. Kohli’s twin centuries made him the second skipper in Test cricket history after the Australian Greg Chappell to record the feat.

Kohli’s century on Sunday is his ninth in Test career, and fourth in Australia. The right-handed batsman has certainly put behind the poor tour of England and has come out all guns blazing Down Under. 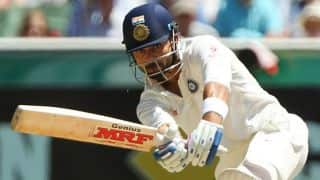