Indian captain Virat Kohli on Thursday made it to the history books when he became the batsman to score the fastest 8,000 ODI runs in the history.

On Thursday, India captain Virat Kohli made it to history books when he became the fastest to 8,000 runs (in 175 innings) in the history of One-Day Internationals (ODIs). Kohli achieved the feat during India’s win over minnows Bangladesh in semi-final 2 of the ICC Champions Trophy at Edgbaston, Birmingham. He went past AB de Villiers, who previously held the record, reaching 8,000 runs in 182 innings. Kohli scored an unbeaten 96 off the same deliveries, including 13 fours. He was also involved in a splendid 178-run stand for the second wicket along with Rohit Sharma, who too remained unbeaten on 123. As Kohli added 96 runs in the stand, Rohit contributed crucial 82 runs in the stand. FULL CRICKET SCORECARD: India vs Bangladesh, ICC Champions Trophy 2017 Semi-Final 2 at Edgbaston

De Villiers had broken the record of Sourav Ganguly, who had reached the milestone in 200 innings. The next three names on the list are Sachin Tendulkar (210 innings), Brian Lara (211) and MS Dhoni (214). 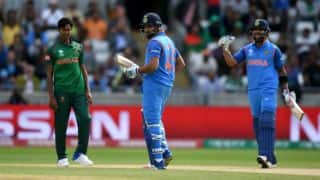