India’s charismatic batsman Virat Kohli became the highest run scorer for India, against visitors New Zealand, in the fifth and final One-Day International (ODI), at the Dr. YS Rajasekhara Reddy ACA-VDCA Cricket Stadium in Visakhapatnam on Saturday. He achieved the feat as he has now scored 332 runs, while the previous record was being held by Gautam Gambhir, who scored 329 runs. He is also nearing his half-century, as he prepares to play a big innings. Currently, India are 189 for the loss of two wickets in 37 overs, with Virat Kohli on 49, and skipper MS Dhoni on 41. FULL CRICKET SCORECARD: India vs New Zealand, 5th ODI at Visakhapatnam 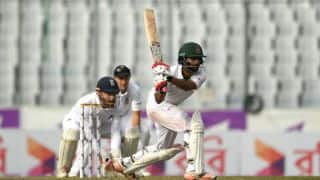