India have won three out of six ODIs in the series and aim to win their first bilateral series against South Africa in their own den. India registered biggest win margin against South Africa and South Africa s heaviest defeat in terms of runs at Cape Town. India won the match comfortably by 124 runs as the spinners shared eight wickets among themselves. Yuzvendra Chahal and Kuldeep Yadav helped India in getting the host all-out for 179.

Hats off to them

“I don’t have words to explain this,” Virat Kohli said in post match presentation.

“It’s outstanding to see two guys just totally spinning a web around the opposition. There doesn’t seem to be a way out at all. It’s unbelievable. Credit to them. Both have been working hard on their game. Both are very brave in terms of how they bowl and the kind of fields they want as well. They are very brave tossing the ball and asking the batsman to come out and play a risky shot. Hats off to them but the other debate is a bit away from now. You never know what happens in the future but I am really happy at the moment.”

Kohli thinks the spinners did a very well job on a pitch that was not favourable to them. Aiden Markram and JP Duminy were going good with their 78 run partnership until Kuldeep provided a break through. The second innings was wrapped up within next 100 runs.

“The thing is very simple. They are told to go for wickets at all times. When you are going for wickets you are bowling in areas that are uncomfortable for the batsmen and more often than not they end up defending. When you bowl wide and try to save runs then you give an opportunity to take singles also. So I think all the credit has to go to them because they’ve executed those lines and lengths perfectly,” Kohli said.

“They’ve always, every over they’ve asked two-three questions of the batsmen, that is something outstanding. I haven’t seen that before. Every over they might pick up two wickets, that is the kind of belief they have in their abilities and the team has a belief in them, the team is backing them. They might get hit for 70-odd in the next game. But there is no problem in that because you know that if they bowl attacking lines then they will end up picking 2-3 wickets every game. Going ahead in these conditions now, and we are going to play the World Cup away from home, that I think is going to be the massive factor for us.” 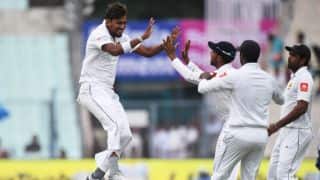