Kohli said the team needs to analyse whether to change the batting order.

Bengaluru: Royal Challengers Bangalore (RCB) may have faltered against SunRisers Hyderabad (SRH) after notching up a win in their first game, but captain Virat Kohli expects a complete turnaround once Adam Milne and Mitchell Starc recover from their respective injuries to make it to the playing XI.

Even though Kohli backs local recruits Varun Aaron and Abu Nechim to hit their straps soon, he believes that New Zealand medium-pacer Milne and Starc’s return will certainly give the bowling attack a big boost.

“Guys take some time to get into rhythm … So we need to give them time. Someone like Varun and Abu, they have the ability to hit the length. Once they get into the groove, I think Adam Milne coming in from next game onwards – hopefully he is almost 100 per cent fit and that will boost bowling big time … Mitch Starc joining us, then it is going to be a complete turnaround,” he told reporters at the post-match press conference here.

“Until then we have to use available resources to pick wickets and need to bowl in right areas. We were not able to do that in the game against SunRisers,” he added. IPL 2015 Previews

Kohli said the team needs to analyse whether to change the batting order or get in experienced players like Subramaniam Badrinath.

“It is very important that the guys get to bat in the right slots or we have more options in Sarfaraz Khan and Badrinath and experienced guys who haven’t played a game so far … We need to sit and analyse probably a few changes here and there in the batting order that will help few guys come in to the kind of plans they want to be,” he said.

Backing Mandeep Singh, who has failed so far, Kohli said there is a need for giving ample opportunities to each player but at the same it is necessary to figure out the time required for rotating the players.

“He [Mandeep] is someone who has performed at the top of the order for Kings XI. We will have to see what best works for us. We will have to sit and take a call on that – whether we want to give Mandeep a chance at the top of the order … we need to back guys – we need to give ample opportunities and at the same time, we need to figure out how much time we have in the tournament. Good we only had two games – we won one and lost the next game,” he said. IPL 2015: CSK, KKR, RCB, KXIP, MI, RR, SRH, DD full team details in IPL 8

Replying to a query, Kohli said Yuzvendra Chahal was the biggest positive in the last game as he bowled exceptionally well in wet condition and on a flat track.

“Chahal bowled with the wet ball in those conditions. The wicket being flat and the ball was coming nicely in the second innings – that is the big positive for us … His bowling is the biggest positive from this game and there is not much about to say about rest of it,” he said.

Kohli said the team has had no worries on the batting front but emphasised on the execution of the plans, which they failed to do against SunRisers yesterday.

“Batting has not been a worry for us in the last couple of years. There is someone to step up all the time and someone to pick up at right times. Guys are in good mental space as far as hitting the ball and planning for the game is concerned, but what matters is how you execute on that particular day,” he said. IPL 2015 schedule: IPL 8 match time table with venue details

Asked about AB de Villiers injury, Kohli said he should be fine.

“He told me he has done that few times in his career and he should be fine – he is walking around fine. He is going to be okay,” he said. The South African had twisted his ankle while fielding.

Kohli said if he would have carried on RCB could have gone on to get 180 runs, which could have been competitive, and also pointed out that the bowlers did not execute the plans.

“May be, if I had carried on we would have gotten 20 to 25 more runs – 180 plus would have been more competitive, but it is all about how you collectively play as a team – 170 odd runs was not enough .. also we could not execute our plans with the ball,” he said.

Kohli said their focus would be to get early wickets from next match onwards. “Early wickets are always important in T20 cricket, and for that matter in any format of the game. That’s going to be our focus for next matches,” he said.

Kohli said the 50-odd runs conceded in the first six overs took the game away from RCB as it was very difficult for bowlers to execute plans in wet condition.

“Once you have 60 runs in five overs it is very difficult to come back, especially knowing that the ground is still wet because of rain, and the ball is difficult to grip as well … that was the phase where we gave too many and it was an uphill task from there on,” he said. Indian Premier League (IPL) 2015: Complete coverage

Is David Warner the best left-handed batsman in contemporary cricket? 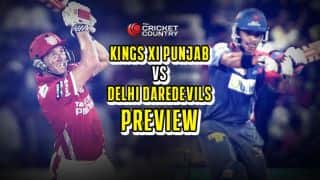