Virat Kohli s India equalled Australia and England in being the only sides to have notched up 9 consecutive Test series wins.

Defeat tastes bitter, more bitter if you the captain. Virat Kohli knows it now. The 135-run defeat at Centurion meant India have slumped to a 0-2 deficit and conceded the 3-Test series. This is the first time Kohli tasted a series defeat as captain. His first tryst with Indian captaincy was in mid-2013, during a tri-series in West Indies when he stepped in for an injured MS Dhoni. He later led India to an ODI series win at Zimbabwe.

The Test captaincy cloak first came unto him during the Australia tour of 2014-15. It started with a close defeat at Adelaide. Two Tests later, Dhoni announced his retirement and Kohli was appointed full-time Test captain mid-series. In early 2017, Dhoni stepped down from limited-overs captaincy and Kohli got the charge.

Kohli had not lost a series across formats as full-time skipper till 2017. In doing so, Kohli s India equalled Australia and England in being the only sides to have notched up 9 consecutive Test series wins.

Despite India s poor show with bat, Kohli kept them in the hunt with a fine 153, becoming only the second Indian skipper after Sachin Tendulkar to register a hundred in South Africa. India were a bit surprised by the wicket which was on the flatter side. They had expected it to be something similar to the lively Cape Town track.

We thought the wicket was really flat. It was surprising. We thought we have our best chance to put runs on the board. Especially after the way South Africa ended the first innings, we had the momentum. We should have got the lead. It s the batsmen who have let the team down again, Kohli lamented at the post-match conference.

On a personal front it was a good Test for Kohli, but he asserted that milestones mean nothing if they do not contribute towards wins. Kohli also pointed out the fielding lapses that led to the defeat. Not only was Parthiv Patel s wicketkeeping below par, India disappointed with their ground fielding and catching.

150 means nothing now that we have lost the series. Having not won the game, personal milestones do not matter at all. You go out there and you give your best shot. We tried our best and we just weren t good enough. They were better than us, especially with the fielding, Kohli added.

The third and the final Test will be played at Johannesburg starting January 24. 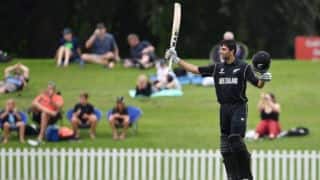