India captain Virat Kohli added another feather to his illustrious cap as he notched up another batting record in international cricket. Kohli on Thursday became the fastest batsman in the history of the game to register 23,000 international runs. The right-handed batsman achieved the feat during the opening session of India versus England fourth Test at the Kennington Oval, London. He completed the milestone with an on-drive off his principal tormentor James Anderson. The Indian captain took only 490 innings to register the feat while Sachin Tendulkar had taken 522 innings to achieve the same milestone.

Third on the list is former Australia captain Ricky Ponting who had taken 544 innings to score 23,000 international runs. Ponting is followed by former South African all-rounder Jacques Kallis (in 551 innings) and Kumar Sangakkara (568 innings). Rahul Dravid is the third Indian on the list after Kohli and Tendulkar. Dravid is at the sixth spot with 576 innings.

The 32-year-old Kohli has been going through a lean patch of late as per his own standards and has not scored an international hundred in 51 innings. He last scored a century way back in 2019 against Bangladesh during the pink-ball Test at the Eden Gardens, Kolkata.

In the fourth Test, England are in a strong position at Lunch on day 1 after leaving India rattled for 54/3 on Thursday. Bolstered by the inclusion of Chris Woakes, England seamers once again tormented the Indian top-order batsmen in the opening session of the fourth Test.

India’s openers Rohit Sharma (11) and KL Rahul (17), after showing initial promise, were done in by high-quality seam bowling, while Cheteshwar Pujara (4) got one from James Anderson that could easily qualify to be the “ball of the series”.

At the lunch break, Virat Kohli (18 batting) was soldiering on in company of Ravindra Jadeja (2 batting), who was given a promotion at No.5 ahead of two out-of-form batters — Ajinkya Rahane and Rishabh Pant — under cloudy conditions. 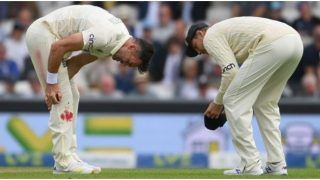