Test captain Virat Kohli on Wednesday said that India are not satisfied despite taking an unassailable 2-0 lead in the series vs South Africa.

New Delhi: Test captain Virat Kohli on Wednesday said that India are not satisfied despite taking an unassailable 2-0 lead in the series and insisted that they will be ‘ruthless’ against South Africa in the fourth and final match at Delhi’s Feroz Shah Kotla stadium. “We want to be ruthless in terms of mindset. We are not satisfied with two-nil. If we have any chance to go three-nil, we try to achieve that by giving our 100 percent,” said Kohli, who will captain his side for the first time at his home ground on Thursday. Asserting that partnerships are key to success in Test format, the 27-year-old admitted that his batsmen have failed to apply themselves properly in the ongoing series and expressed that they are keen to rectify it in the inconsequential last match. FULL CRICKET SCORECARD: India vs South Africa 2015, 4th Test at Feroz Shah Kotla

“We haven’t applied ourselves properly. Partnerships are the key. We have lost wickets at wrong times. It has been just two test matches. It is not like we have done that regularly. We played really well after the Galle Test (against Sri Lanka). So it is just the matter of getting into that mindset and make sure that people want to bat four sessions for the team and make sure that we extend our partnerships from 70 to 120 or 150 plus. That is how strong teams perform in Test cricket. That has been lacking from our end in this series,” the captain added. ALSO READ: Virat Kohli hits back at ICC; highlights string of 50 or less scores in South Africa 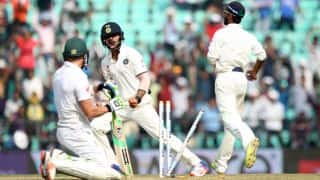