Kohli (30) now ranks below Tendulkar, who had scored 49 ODI hundreds during his two-decade-long career.

New Delhi: Former India opener Virender Sehwag on Saturday predicted that skipper Virat Kohli has at least 10 years of cricket left in him and the right-hander can easily overtake batting maestro Sachin Tendulkar‘s records. “We never thought that there would be another (Sachin) Tendulkar. But (Virat) Kohli has changed this mindset. I think Virat can surpass Tendulkar’s records,” Sehwag was quoted as saying by India TV news channel.

“Virat is just 28 years old and he will play at least for 10 more years and I think he will create some mega records and can surpass Tendulkar,” he added. Kohli recently hammered his 30th One-day International (ODI) hundred during the tour of Sri Lanka to equal former Australia captain Ricky Ponting’s record. Kohli now ranks below Tendulkar, who had scored 49 ODI hundreds during his two-decade-long career.

Recently, Kohli had said that it will take “one hell of an effort” to reach anywhere near Tendulkar’s world record. “The great man (Sachin Tendulkar) is quite a bit away. That’s going to take a hell of an effort. Again, I am not thinking about that. It’s only about the team where even if I score a 90 not out and the team goes across the line, it’s good enough for me,” Kohli said during the recent Sri Lanka tour.

The 38-year-old Sehwag also revealed that he would like to change his name to “God” Sachin Tendulkar. “I would want to change my name to Sachin Tendulkar if I could do it. He has tonnes of records, I am not even close to him. He is called as the “God” and who would not want to be a God in this mortal world,” he said.

Sehwag, who was Tendulkar’s opening partner for a long time, said he envies the master blaster’s records. Tendulkar, who played for India from 1989 to 2013, is arguably the most complete batsman and highest international run-scorer in the history of the game.

Even after his retirement, the little master remains a revered figure in India and also around the world and is fondly called as the “God of Cricket” by his millions of fans. 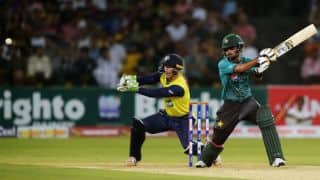