Karachi: Describing Virat Kohli as a `fantastic` player, veteran spinner Harbhajan Singh has said that he could see the current Test skipper leading the ODI team as well in the future.While labeling Kohli as his current favourite, Harbhajan believes the swashbuckling batsman would take India to greater heights, the Express Tribune reported. Virat is a fantastic player for India.He is like my brother. I think he will take India to the next level. He is doing so well in Test cricket as captain, but I think he is also going to lead India in ODIs in future, Harbhajan said while talking to his fans on Facebook. Live cricket scorecard: India vs New Zealand, 3rd Test

In fact, I have always said that Sachin Tendulkar is my all-time favourite cricketer. And now my current favourite is Kohli. He is a really fantastic player, he added. Besides praising Kohli, the 36-year-old off-spinner also revealed the list of his all-time favourite spinners. Harbhajan, who was recently blessed with a baby girl, named compatriot and former leg-spinner Anil Kumble, Australia leg-spin legend Shane Warne and the Pakistan spin legend Saqlain Mushtaq as his favourites.

Kohli in the meanwhile scored his 13th half-century in third Test against New Zealand at Indore. This is Kohli s first fifty after seven innings. His last big score in Tests came against West Indies at Antigua in the first match of the series. In the second innings of the last Test against New Zealand at Eden Gardens, Kohli had the chance to score a fifty but a low bounce delivery made him walk back to pavilion as he was given out lbw. In last one month, his batting has become a matter of concern for Team India but it hasn t affected that much. 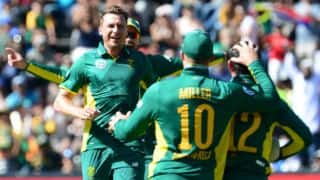