Kohli and Pujara form the crux of India's Test line-up.

With a relatively inexperienced bowling attack at its disposal, India will be banking on its batsmen to get the team in position of strengths and the spotlight especially will be on Virat Kohli and Cheteshwar Pujara in the forthcoming Test series against England. The preparations have already begun in earnest for the five-Test series between the two teams starting in Nottingham on Wednesday. And for Kohli and Pujara, the series will be an exceptional test of their batting skills in hostile conditions.

For long, Kohli and Pujara were deemed as the next best thing, the next Sachin Tendulkar-Rahul Dravid combination and the series in England will be their toughest test. Kohli was a prime target for England when they visited India in 2012-13. The visitors set traps for him, fielders in position as soon as the young batsman tried to drive the ball on either side of the wicket.

As a result they were able to keep him quiet as Kohli garnered only 188 runs in that four-match series. But then he ground his way to a hundred in the last Test at Nagpur and labelled it ‘a learning experience’. There has been no looking back since for Kohli then as he has risen to stardom with his bat. His batting averages in two Tests each in South Africa and New Zealand, were 68 and 71.33 respectively and this is a straight pointer to his ever-growing stature.

Now in England, it goes without saying that the team needs an encore from Kohli. Alternately, Pujara was very successful when he first played against England, also in the 2012-13 home series. He was seemingly unstoppable, notching up 438 runs in four matches at an average of 87.60 with two hundreds (one of them a double-hundred at Ahmedabad).

Expectations grew thereafter and he seemed comfortable in South Africa, averaging 70 in two Tests. But his form in New Zealand (average 15 in two Tests) left a lot to be desired. Looking to make amends, he has made a strong start to the tour so far, hitting two fifties in as many practice games in Leicester and Derby.

The batsmen tried to bat a little too differently than they would in India,” India coach Duncan Fletcher has told bcci.tv this weekend. “The only actual difference was they had to get used to a bit more bounce.” The English side, led by Alastair Cook, is to arrive in the city on Sunday and will immediately hit their straps two days ahead of the first Test.

The Indian team has been in Nottingham for two days now and are into a complete Test mode after decent preparations in the two warm-up games against Leicestershire and Derbyshire. For the first time since the two sides met in 1986, India will take the field against England without Sachin Tendulkar.

Over the years Rahul Dravid, Sourav Gangly, VVS Laxman, Anil Kumble, Zaheer Khan and Harbhajan Singh left their own stamp on these encounters, especially the victory at Headingley on the 2002 tour and then the 1-0 Test series win back in 2007. Now they are all gone from the scene and a new Indian team has taken shape, one that holds the key to the future.

In a way, this series marks the formal end of the transition period in the Indian camp, a saga that had started in England in 2011 with a 0-4 whitewash. It was followed by another 0-4 defeat in Australia later that season and then an embarrassing 1-2 loss at home (2012-13) to England again.

Perhaps it was a testament to the same that Tendulkar and Dravid were busy playing an exhibition match at Lord’s while the Indian team is in Nottingham preparing for the Test series. “We have brought a young side here. England are also re-building their side at the moment. The preparation of the Indian side has been quite decent from what I have heard from Rahul (Dravid). I think it will be a decent contest and hopefully it will be played in the right spirit,” Tendulkar had said at Lord’s yesterday, after the exhibition game marking 200 years’ celebration for the Home of Cricket. 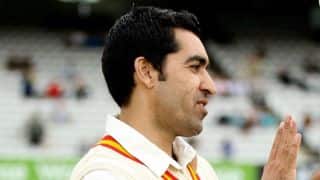