Virat Kohli and Chris Gayle cracked fifties in Match 50 of Indian Premier League (IPL) 2016, Royal Challengers Bangalore vs Kings XI Punjab. Gayle started his innings a bit slowly but soon gained strength and started hitting fours and sixes at ease. Kohli, who was a little slow to reciprocate soon came in his groove and hit some big shots in his innings. Kyle Abbott, KC Cariappa and Akshar Patel were particularly taken on by the two opening batsmen. However, Akshar took Gayle’s wicket when he reached 73 having faced only 32 balls. He hit four boundaries and eight sixes, and batted at a strike rate of 228.13. Live Cricket Scorecard: Royal Challengers Bangalore vs Kings XI Punjab, IPL 2016 Match 50 at Bengaluru

Earlier, heavy rains delayed the crucial league tie for hosts RCB against KXIP at the Chinnaswamy stadium here. “As it is still raining, toss will be held only after it stops and umpires inspect the ground to assess its condition to start play,” a Karnataka State Cricket Association (KSCA) spokesman had told IANS. The toss was to be held at 7:30 p.m. and the match was scheduled to begin at 8 p.m. Live Blog: Royal Challengers Bangalore vs Kings XI Punjab, IPL 2016, Match 50 at Bengaluru

Toss finally took place at around 9.32. The match was reduced to a 15-over for both the teams to make up for the time lost. The 22-yard pitch and most of the ground was covered with tarpaulins, heavy rain for over an hour from 6:30 p.m. onwards, flooded the outer field and kept hundreds of fans away from the stadium. Mitchell Johnson: AB de Villiers is toughest batsman I have ever bowled at 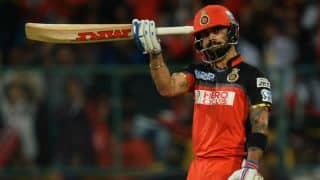