Virat Kohli brought up the achievement off 87 balls with the help of seven fours.

India vice-captain and batting mainstay Virat Kohli on Tuesday completed his 10th half-century in Test cricket during the third India-Australia match at the Melbourne Cricket Ground (MCG). Kohli brought up the achievement off 87 balls with the help of seven fours.

Kohli was involved in another verbal duel with the Australians on Day Five of the third Test. India are chasing 384 to win the Melbourne Test and have lost two early wickets. Tempers flared when Kohli played one down the ground off Mitchell Johnson and set off for a run. Murali Vijay did not respond at the other end. Kohli was left stranded and ran back and David Warner threw it wide. Brad Haddin was unable to effect the run-out.

Following that, Kohli had a few words with some of the Australian players. The umpires came in and had a word with Kohli. There has been quite a lot of chatter between Kohli and the Australians through the game. Kohli and Johnson had clashed in the first innings, and then the Indian batsman went on to say he did not respect Johnson. Those comments caused quite a stir and given the heated exchanges in this Test, one does not expect both sides to back away from it. 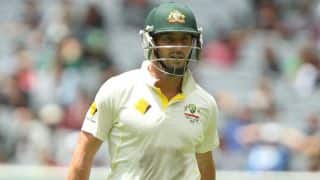