India s Test skipper Virat Kohli completed 2,000 runs as captain as he batted on Day Three of the fourth Test of the ongoing series at Wankhede Stadium, Mumbai against England on Saturday.

India s Test skipper Virat Kohli completed 2,000 runs as captain as he batted on Day Three of the fourth Test of the ongoing series at Wankhede Stadium, Mumbai against England on Saturday. Kohli became the seventh Indian captain to have scored as many runs in the format. It was MS Dhoni who reached the milestone the last time for India. It has been a day of many records for Kohli as he completed 4,000 runs in the format and becoming the 14th Indian cricketer to do so. He was the sixth fastest to get to the landmark among the Indians. He also became the only Indian to have scored 1,000 runs in 2016 and third Indian captain (after Sachin Tendulkar and Rahul Dravid) to have scored 1,000 runs in a calendar year.

Kohli scored 139 runs to get to the record. India resumed batting at 146 for 1 on Day Three, with Cheteshwar Pujara and Murali Vijay continuing to bat. Pujara departed early in the morning for 47 and that brought Kohli out at the crease. Kohli built up a strong partnership with Vijay which gave the Indian innings with both stability and runs. Vijay scored 136 runs before departing but Kohli stayed at the crease. He formed brief partnerships with Karun Nair, Parthiv Patel and Ravindra Jadeja as India eventually gained the lead.

Apart from frontline bowlers Moeen Ali and Adil Rashid, it was Joe Root who surprised with his spell bagging the wickets of Parthiv and Ravichandran Ashwin. England had earlier put up a total of 400 runs. Debutant Keaton Jennings scored a magnificent century while Moeen Ali and Jos Buttler contributed with individual half-centuries. India are 2-0 up in the series with one more Test to go in Chennai. Sourav Ganguly on look out for his ’missing’ friend Rahul Dravid 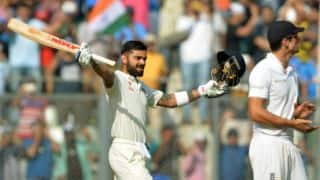