India’s star batsman Virat Kohli showed glimpse of form when he completed his 35th half-century in One-Day Internationals (ODIs), against Australia in the first ODI. The match is being played at the Western Australian Cricket Association (WACA) Ground in Perth. Kohli brought up his half-century with a thickish edge that flew for a six, off the Australian debutant Scott Boland in the 32nd over of the innings. India have been in command since the beginning of this match, and Kohli summed up his side’s domination by slamming the first half-century against Australia, in Australia. This is Kohli’s overall 35th half-century, and his 19th overseas. LIVE CRICKET SCORECARD: India vs Australia 2015-16, 1st ODI at Perth

India were 163 for 1 after 32 overs, with Rohit Sharma eyeing a century as he was on 90 not out off 106 balls, with Kohli reaching a fluent 56 off 64 balls. Earlier in the innings, India’s right-handed opening batsman Rohit Sharma on Tuesday created history when he registered the highest individual total for his country, at the Western Australian Cricket Association (WACA) Ground in Perth. Rohit achieved the feat during the first One-Day International (ODI) against Australia on Tuesday. लाइव क्रिकेट ब्लॉग, हिन्दी में: भारत बनाम ऑस्ट्रेलिया, पहला एकदिवसीय, वाका, पर्थ में

Rohit achieved the feat with a single off Australian pacer Josh Hazlewood in the 28th over of the match. India were 137 for 1 after 28 overs, with Rohit and Virat Kohli completing their century stand for the second wicket in this match. This is the eighth century partnership between the two Indian batsmen in ODI cricket.  Live Cricket Blog & Score Updates: India vs Australia 2015-16, 1st ODI at Perth 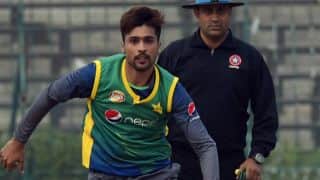