Virat Kohli, the Indian Test skipper wished Michael Clarke good luck for the future. Kohli is currently in Sri Lanka preparing for the three-Test series against Sri Lanka. Australia captain Michael Clarke said Saturday he would retire from international cricket after the fifth Ashes Test against England at The Oval later this month. The 34-year-old Clarke made his announcement after England completed a crushing innings and 78 run victory over Australia in the fourth Test at Trent Bridge to take an unbeatable 3-1 lead in the five-match Ashes series. “I will have one more Test and that is the end of my career,” said Clarke during the post-match presentation ceremony. “I am retiring from international cricket. I don’t want to jump ship now so I will have one more go at The Oval,” he added after reports in Australian media earlier Saturday that he was about to end his Australia career. Read: Michael Clarke to retire after Ashes 2015: Twitter Reactions

The fifth Test starts at The Oval, in south London, on August 20. The 34-year-old Clarke, one of the best batsmen of his generation but plagued by a longstanding back problem and more recent hamstring trouble, is in a desperate run of form, having reached 25 just six times in his last 30 Test innings. Clarke has made 28 Test centuries, one short of Australia batting great Donald Bradman’s tally, in his 114-match career. Saturday’s defeat saw Clarke become the first Australian in more than a century to lose four successive Ashes series in England.  Clarke averages just 16.71 in eight innings this Ashes, with a top score of 38 and, as a consequence, his career Test average has dropped below 50 — widely considered to be the mark of an all-time great. 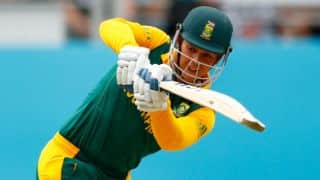