Virat Kohli is the first cricketer to cross the milestone on the photo-sharing platform.

Virat Kohli crossed a personal milestone on Sunday when the number of followers on his Instagram account exceeded the 1 million mark, becoming the first cricketer to achieve the social media milestone. Kohli, who is also the most followed cricketer on Twitter with over 8 million followers, posted on the photo-sharing website thanking his fans. “1 million already. Super stoked. Thanks for all the love and support always people. Love you all. #grateful”, Kohli was quoted as saying in his latest post. Legendary Indian batsman Sachin Tendulkar is the second-most widely-followed cricketer on instagram with over 977,000 followers, while South African One-Day International (ODI) skipper AB de Villiers has 566,000 followers to his credit. Chris Gayle (433,000), Yuvraj Singh (402,000) and Dale Steyn (359,000) are the other cricketers with a high following on the site.

Kohli, who had crossed the 8 million-mark on Twitter in September earlier this year, is one of the most popular athletes in the world. The Delhi-born batsman’s fan-following grew many-fold since his ascendancy to the Indian Test captain following the retirement of MS Dhoni in the five-day format. Kohli, since then, has led India to a 2-1 Test series win in Sri Lanka earlier this year, India’s first in the country since 1993. Kohli also led India to a thumping 3-0 victory over South Africa in a four-match Test series in October-November to help India rise to the No. 2 spot on the ICC Test rankings. Kohli is also one of the most prolific run-getters in his side, especially in ODIs where he already has amassed nearly 7,000 runs in the 50-over format. READ: Virat Kohli crosses 8 million followers on Twitter!

1 Million on Instagram already. Super Stoked. Thank you for all the love and support always. #Grateful pic.twitter.com/TOwB7riyBB

Kohli launched his personal line of clothing christened ‘Wrogn’, which he endorses every now and then. Kohli was seen promoting the brand at a mall in Mumbai recently after the series against South Africa, in which he shared many interesting tales. 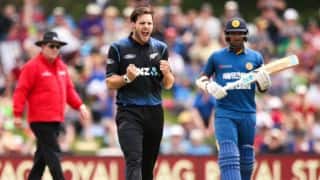