Royal Challengers Bangalore (RCB) captain Virat Kohli was dejected that his good show didn’t help the team clinch a victory against Sunrisers Hyderabad (SRH) in the Indian Premier League (IPL) 2014 encounter in Hyderabad on Tuesday. Hyderabad chased down a 161-run target by seven wickets against Bangalore.

“I was looking to step up for the team. No contribution is good enough if you don’t win the game,” Kohli said at the post-match presentation ceremony.

Kohli, however, was happy with the total they put on especially after the start that they got. “The pitch became slightly better to bat on under lights, which they hadn’t expected before the toss.”

Sunrisers captain Darren Sammy on his part said, “We needed a win as this was our last game in front of these beautiful fans. The last two overs bowled by Bhuvneshwar Kumar and Dale Steyn kept us in the game.

“Credit to our openers. We’ll go to Ranchi, try for a clinical performance, hope other results go our way.”

Man of the Match David Warner, who scored 59 runs while opening the innings, said that his aim was to bat till the end.

“It was different batting at the top. I wanted to bat till the end. Unfortunate run-out for Shikhar Dhawan (50), we’ll have to work on that.

“Credit to the curators. They’ve produced fantastic wickets for us. We just wanted to back our instincts. Credit to Shikhar. Nice to see him dig in and get a good total after the first six.” 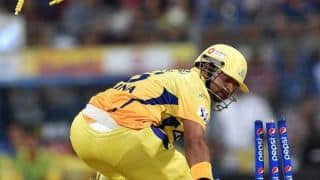 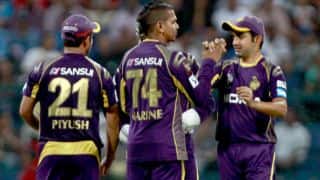