KL Rahul and Karun Nair ensured that India did not suffer any more casualty going into tea at 256 for 3.

India, after dominating in the the first session did very less to keep the momentum going in the post-lunch play against England, in the fifth Test at Chennai. With 9 wickets intact heading into the second session, India started poorly losing Chesteshwar Pujara early, soon followed by Virat Kohli. England, on the other hand, applied negative tactics that saw Indian batsmen make mistakes. KL Rahul continued his batting exhibition, reaching his personal milestone of scoring first century at home. He was well supported by his state teammate Karun Nair towards the tea break. The pair guided India to safety at tea on 256 for 3, with England still leading by 221 runs.

England started with Ben Stokes and Liam Dawson in the second session, which saw instant result. Stokes, into his second over of the day and third of the match, captured Pujara s priced scalp. Stokes did well to set up Pujara, who ended up playing away from his body. Pujara fell to a fuller length delivery, which was preceded by few bouncers. He ended up giving a simple catch to Alastair Cook in first slip for 16. Stokes did manage to generate reverse swing. The flip side of Pujara s wicket saw King Kohli coming out in the middle amidst a huge roar in the stadium.

It was a roar which echoed again as an overthrow allowed Rahul to complete his second run for a well-deserved century. Rahul got to his hundred in 171 balls, but the joy was more on his skipper s face. Rahul needed two runs to complete his century, and even though the second run was yet to be taken, Kohli s arms went up high in celebration as soon as he saw the overthrow. This was Rahul s first Test ton in India and fourth overall.

Dawson used his negative line to good effect as it blocked the flow of runs. Both Kohli and Rahul played out a tight spell by Stuart Broad and Dawson. Kohli, to his credit, left most of the deliveries but gave his wicket away a lapse of concentration.

Broad, prearranged Kolhi quite brilliantly coming around and over the wicket every second delivery with a sizeable change in length. A delivery outside off that was followed by a fuller one resulted in Kohli s downfall as he ended up giving Keaton Jennings a simple catch at extra cover.

Karun Nair would have felt the pressure following a few ordinary outings, walking into bat at No. 5 ahead of Murali Vijay, who is yet to come out. India eyed stability after losing quick wickets. Nair played out a rough time in middle against Broad and Rashid.

Nair struck his first boundary of the innings straight-driving Broad, who was making good use of the crease while bowling.

Nair must have felt comfortable with Karnataka teammate Rahul in middle. The pair had helped their state side to a Ranji Trophy title against Tamil Nadu in 2014-15.

Partnership between both stands at 45 runs, with Rahul on 133 not out and Nair reaching 19 not out. Rahul and Nair ensured that India did not suffer any more casualty going into tea at 256 for 3. 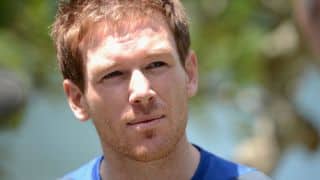 Eoin Morgan: No regrets over backing out of Bangladesh tour