Kohli batted for the Bengal stumper.

New Delhi: India‘s Test captain Virat Kohli feels that it will be difficult to replace someone like Mahendra Singh Dhoni but Wriddhiman Saha according to him “deserves” to don the big gloves for the national team for the “next five to six years”.

Asked about who according to him is ideal to replace Dhoni behind the stumps in the longer version, Kohli batted for the Bengal stumper. READ: MS Dhoni believes current bunch will be Indian cricket’s core for next 7-8 years

“It’s a huge responsibility for anyone to replace someone like MS Dhoni. I have learnt from him a lot. As far as replacements are concerned, there are keepers like Saha, Dinesh Karthik, Parthiv Patel and Sanju Samson,” Kohli said at a promotional event in the city.

“But if you ask me personally, Wriddhiman Saha deserves a go. He has played as replacement and we all know that he is a world class wicketkeeper. He is 30 now and he also realises that he needs a longer rope. I am excited about him and believe that he deserves to be India ‘keeper for next 5-6 years,” India’s Test captain made his choice clear. READ: Wriddhiman Saha: No scope for relaxing despite MS Dhoni’s retirement

On how he is growing in his role, Kohli replied, “I believe in giving ownership of the team to everyone. I speak to all the players. To bring everyone on the same page, you need to treat different individuals differently. I am learning the ropes and probably also getting calmer.”

The last statement was intended at a scribe, who asked whether now being a businessman would make him “calm”, and Kohli smilingly counter-questioned, “I will answer that when you tell me how is my calmness related to my business investment.” READ: Wriddhiman Saha: Just a back-up wicketkeeper or more?

Asked about the youngster, who has caught his attention in the IPL, Kohli named Royal Challengers Bangalore‘s (RCB) Haryana leg-spinner Yuzvendra Chahal as the “bowler to watch out for”.

“Yuzvendra Chahal according to me has a lot of confidence in his abilities. He is full of self belief and is ready to bowl to any field I give him. He was also our best bowler during the last season,” Kohli said while speaking at the launch of his chain of fitness centres at a city hotel. READ: Wriddhiman Saha’s performance in the 1st Test at Brisbane could make or break his career

RCB came back to winning ways yesterday and according to the skipper whether, it’s India or for an IPL franchise, a “loss always hurts”.

“If you feel that it’s only when you play for India, a defeat would matter and when you are playing for a franchise, it’s not like that, then I think that’s a wrong attitude to play cricket. For me, each and every loss matters,” the stylish right-hander said.

Kohli said that he has already told Chris Gayle to “bat freely” and has consciously decided that he and AB de Villiers‘ “batting order” will be close to each other.

“Actually Gayle was taking too much pressure on himself and thought that he has to perform in each and every game in the same manner. We have told him to go out there and play his game freely. It’s also our responsibility [him and De Villiers] and that’s why we are batting closer to each other. With AB, you don’t need to speak to him much. He knows his job,” the RCB skipper said.

He is also happy that Mitchell Starc is fit and has started performing for RCB. “I told the owners last time during auction that I need Mitchell Starc. His graph has just grown in the last three months since the Test series against us and the World Cup. He is probably the best fast bowler in World cricket.” 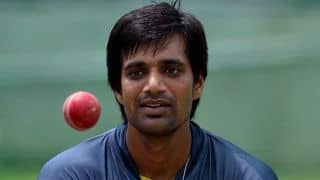