Former Australia captain Ian Chappell has praised Virat Kohli for making changes in his batting and finding a way through the England pace attack.

Former Australia captain Ian Chappell has praised Virat Kohli for making changes in his batting and finding a way through the England pace attack, especially against James Anderson, which has allowed him to prosper in the ongoing five-match Test series.

On India’s last tour of England, Kohli managed a combined 134 in 10 innings a tally he surpassed in the first innings of the first Test at Edgbaston, hitting a magnificent 149. As of now, Kohli, in six innings, has scored 440 runs with two centuries and two fifties.

In 2014, Kohli was dismissed four times by Anderson. This time around, thanks to a better understanding of the conditions and aided by some generous fielding from England slip-fielders, Kohli hasn’t given his wicket to Anderson, England’s all-time leading wicket-taker in Test cricket.

“Fans are currently enjoying another tilt of the highest quality in the battle between Jimmy Anderson and Virat Kohli. In 2014, Kohli experienced a run drought in England and Anderson was the undoubted victor in those tussles,” Chappell wrote in his column for Mid-Day.

“However, on this tour, Kohli, with a little assistance from the butter-fingered English slip fielders, has prevailed. That’s not to say that Kohli has dominated Anderson, but he’s found a way to survive and then prosper which is an achievement against the master swing bowler.”

Chappell compared the rivalry between the two cricketers to that of Harold Larwood versus Don Bradman, Dennis Lillee vs Viv Richards and Shane Warne vs Sachin Tendulkar.

He termed Kohli’s prevalence over Anderson so far as a mighty achievement. “So, for Kohli to be confronted by a champion bowler in favourable conditions and score two hundred runs in both the matches at Edgbaston and Trent Bridge without conceding his wicket to Anderson, is a mighty achievement. Although Kohli was hampered by injury at Lord’s, he still resisted Anderson’s challenge, but the impression was much like Bradman in his Bodyline battle with Larwood, that the bowler’s presence had a profound effect on his eventual dismissals,” he wrote.

India, after conceding a 0-2 lead to England, came back in a dominating fashion at Trent Bridge, a performance worthy of their top-ranked status in Test cricket. With the fourth Test to begin from August 30, they are now aiming to draw level and perhaps, even emulate the success of Don Bradman’s Australia in 1936-37 to win a series in England after being 0-2 down. 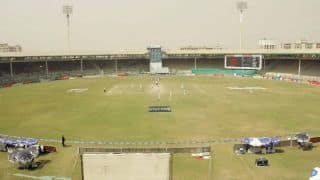