Virat Kohli became the quickest to 25 centuries in ODIs.

Canberra: Australian pace legend Brett Lee on Wednesday heaped accolades on Virat Kohli, describing the swashbuckling Indian batsman as a legend whose aura is comparable to the iconic Sachin Tendulkar. Kohli today notched up his second successive hundred, a 92-ball 106-run innings studded with 11 fours and a six, in the fourth and penultimate ODI against Australia and Lee doffed his hat to the Indian Test captain. “Hats off to Virat Kohli. He is a legend. He has been in terrific form. Where do you bowl to the great man, it is almost like Sachin Tendulkar when he used to come out to bat. Live Cricket Scorecard: India vs Australia 2015-16, 4th ODI at Canberra

“He had that presence and Kohli too has that aura around him. Once he gets going it is very difficult to get him out. He has got aggression and control of course, the guy is in terrific form,” said the former pacer on a day when Kohli equalled Tendulkar’s record of most centuries while chasing — 15 in all,” Lee told ‘bcci.tv‘.

India have already lost the five-match series and Lee said MS Dhoni’s men need to fight back. “I think India played particularly well to score 300, two times then getting close and then getting run down by Australia. They are playing good cricket. Unfortunately for them, they really didn’t have the attack to bowl Australia out. Australia chased down 300 on three occasion,” he said. Full Updates: India vs Australia 2015-16, 4th ODI at Canberra

“The most important thing is that they don’t give up on cricket in the dead rubbers. As I said, they came very close in the first three games. It could have gone either well. If [Glenn] Maxwell got out in MCG then Australia would have lost and it would have been 2-1 in Canberra. Unfortunately for India, that was not the case and India have to fight back, they have to make sure they get early wickets and expose the middle order of the Australian cricket team pretty early.”

Despite Indian bowlers coming a cropper, the 39-year-old Lee had good things to say about them, especially Umesh Yadav and new left-arm seamer Barinder Sran. “Look, I have always been a fan of Yadav. I think he has got good pace and he has got the aggression. I am really impressed by Sran, particularly in the first game in Perth, during his three wickets, he swung back the ball nicely. He has a beautiful seam position as well. He is really skinny and he will naturally get bigger as he gets older, bowling wise he will become a better bowler,” he said. READ: India’s spectacular capitulation awards Australia 25-run win in 4th ODI at Canberra

Last January, Lee had announced his retirement from all forms of cricket after a 20-year career. He had called time on his international commitments in July 2012, but continued to play Twenty20 in both the Australian Big Bash League and the Indian Premier League. 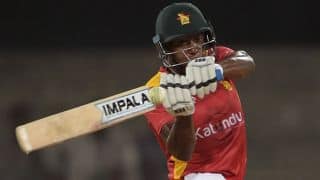