Rohit Sharma moved up four places to reach fifth position after finishing as the leading scorer in the home series with 296 runs at 56.2.

India thrashed Australia 4-1 in the 5-match ODI series. They toppled over South Africa to reclaim the No.1 spot in ICC ODI team rankings. The batting of India was top-notch, courtesy Rohit Sharma s clinical performance. He received able support from opener Ajinkya Rahane along with Virat Kohli. His performance has helped him go up in the ICC ODI batsmen rankings. Rohit moved up four places to reach fifth position after finishing as the leading scorer in the home series with 296 runs at 56.2. Rohit is now on a career-best 790 rating points but his highest ranking has been third, which he attained in February 2016, the ICC said in a statement.

His partner-in-crime and skipper Kohli continues to hold on to the No.1 position. Meanwhile, Rohit’s opening partner Rahane has moved up four places to reach 24th while Australia’s opening pair of Aaron Finch and David Warner also moved up.

Finch gained nine slots to reach 17th while Warner has closed in on Kohli, bridging the pre-series gap of 26 points to just 12 as he has moved to 865 points. He is at No.2. Other batsmen moving up include Kedhar Jadhav who moved up eight places to a career-best 36. All-rounder Marcus Stoinis went up 74 places to 54th.

As for the bowlers, Akshar Patel has achieved career-best 7th position after moving up three places. Yuzvendra Chahal moves up to 75th position. His good friend Kuldeep Yadav has climbed up to 80th spot.

South Africa s veteran Imran Tahir has regained the top spot after Australia s Josh Hazlewood missed the India series due to a side strain. He lost 18 points in the process. Tahir is now just four points ahead of Hazlewood at 718 points. 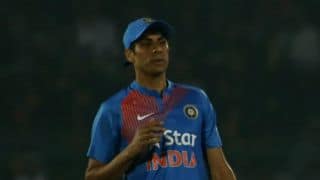