The Virat Kohli-led Bangalore will take on the Dinesh Karthik-led Kolkata at Eden Gardens on Sunday.

Bangalore skipper Virat Kohli is pleased to see Dinesh Karthik’s rise in the ladder as a cricketer. Teammates for India and ex-colleagues at the Bangalore camp, Kohli and Karthik have been a part of several happy dressing rooms. Ahead of the Bangalore versus Kolkata clash at Eden Gardens on Sunday , Kohli said that his Kolkata counterpart has a good cricketing brain and will do a good job as Kolkata’s skipper. Karthik replaced Gautam Gambhir, who led Kolkata for seven editions, as the captain.

“I am very happy for him that he has been given this responsibility. He has got really good cricketing brain. I am sure he will do a good job for Kolkata,” Kohli told on the match eve as reported by PTI.

Karthik, who has led Delhi as a stand-in skipper in the 2014 edition, is looking forward to the challenge. Karthik said, “I will be looking to stay as calm as I can. Lot of times I am sure I will be put under the pump and I have to be able to react in a calm manner without getting too emotional about it.”

Karthik’s last ball six in his eight-ball 29 not out against Bangladesh helped India seal the Nidahas Trophy 2018.

“That’s a good takeaway for me from that game. It gives me a lot of confidence in my batting skills. It’s important that I keep using that as an experience where I can propel to do better things in the future,” Karthik added.

Kolkata and Bangalore will square off at Eden Gardens in their respective openers of the Indian T20 League. Kolkata finished third in the last season, whereas Bangalore, who were the runners-up of 2016 edition, finished last. 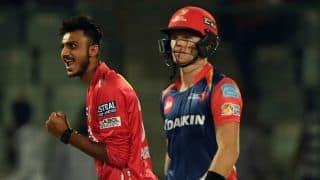 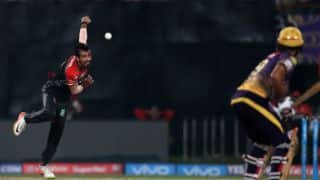