Kohli has endured a prolonged slump in form since the England tour.

Virat Kohli says his fighting half-century last week in the Delhi One-dayer was the kind of knock he needed to overcome the first lean patch of his otherwise prolific career.

Kohli has endured a prolonged slump in form since the England tour, where he failed to score a single fifty in four Test matches.

Speaking to reporters ahead of the fourth ODI between India and the West Indies, Kohli the break he took during the Champions League event did him a world of good as he could work on his game.

“Having that break in between was really good. I worked hard on the areas I needed to work on. Last two games I went in with a clear head. For me it doesn’t matter if I get out playing the same shot again and again, at least I am feeling clear and confident in the mind. I just needed that one innings and that came in the last game,” said Kohli referring to his 62-run knock at Kotla.

Experts and media blasted him for repeatedly getting caught behind on moving balls outside the off-stump. Kohli found all of that criticism funny.

“It is funny,” an amused Kohli said when asked about the criticism on his technique.

“The moment I don’t score runs in two three innings, people tell me you are due for a big score. They totally forget the fact that for the last four-five years I have been consistent in all formats. And I am not trying to show off or something, that’s my nature. That’s how I like to play my cricket (to keep scoring). People need to respect that we are humans and not machines,” said the 25-year-old, who averages 40 in Tests and 50 plus in ODIS.

On a philosophical note, Kohli said the barren run taught him also about people and life.

“I had only heard about it and now I have seen it myself.

In a way it is a pleasant thing. I feel much more stronger and If I feel my cricket is going to improve further,” he said.

Asked how he felt about working hard for every run after scoring piles of runs for India, Kohli replied said, “As a cricketer you feel the need for improvement only when you don’t score runs, you are getting out in a particular way and then you feel the need to address those issues. I have gone back and worked hard on those particular areas of my game. The bad phase has to come again at some point but I feel I will be better equipped to deal with that.”

Kohli reiterated his belief that going into bat with a clear mind is more important than focusing on technique during tough times.

“I have said it earlier too that your technique is as good as how you feeling mentally about your game. You feeling mentally good then your technique is also fine and you end up scoring runs. If you are not mentally confident, it doesn?t matter how technically sound you are, you will find it hard to score runs at the international level. Last game felt good. I stuck to the plans I wanted to,” said the stylish batsman.

Like his other teammates have done in the past, Kohli hailed team director Ravi Shastri’s influence on the players, saying the former India captain supported him unconditionally.

“Ravi is doing what lot of people choose not to do. That is to give confidence to the team. No matter what situation is, he will back you. And I think that is the most important thing. Demolishing or criticizing is the easiest thing to do,” he said adding that Shahstri mentored him, skipper MS Dhoni, Shikhar Dhawan, Ravindra Jadeja and Ambati Rayudu.

Both teams arrived in the hill station only on the eve of the match. Kohli said adjusting to the cold weather is not an issue for the team though he expects a challenging wicket.

“The weather is not an issue as we have played here in the past. Delhi and this place gets really cold in winters but we are used to that. It is more about how the wicket is prepared in Dharamsala. Generally we expect a fast and bouncy track here. It should be a good contest between bat and ball,” said Kohli adding his batting position was not yet decided.

He had dropped down a place to number four in the last game. 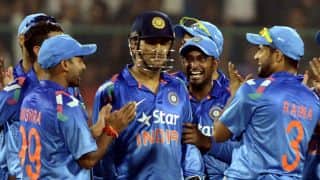 India vs West Indies 2014: Both teams look to save the series ahead of crucial Dharamsala tie 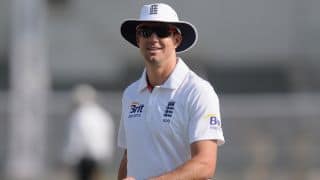